In human studies, Krill Oil has been shown to help maintain blood lipid levels - LDL, HDL, total cholesterol, and tryglycerides - already in the normal range. For a graph and clear explanation of the cholesterol benefits demonstrated in the latest clinical study, click here.

The results of a recent study have shown with a high level of certainty that Krill Oil, at a daily dose of 300 mg, may significantly inhibit inflammation by reducing C-reactive protein (CRP).

After taking Krill Oil 300 mg/day for a period of 7, 14, and 30 days, CRP was reduced 19.3%, 29.7% and 30.9%. In this study, 90 patients with cardiovascular disease, rheumatoid arthritis or osteoarthritis and with increased levels of C-reactive protein >1.0 mg/dl were evaluated. Patients were split into a Krill Oil group and those taking placebo. The Western Ontario and McMaster (WOMAC) University Osteoarthritis index was administered to validate the results.

Woman's World said: "Krill oil is so potent, women who took it for three months reported a 51% boost in energy, alertness, memory, concentration and stamina in a recent Canadian study. And almost 100% described having a greater sense of well-being and happiness -- plus a 31% reduction in aches and pains!"

These figures were derived from a quality of life study comparing the benefits of Krill Oil to Fish Oil. The quality of life study was done in conjunction with the Phase II clinical trial "Evaluation of the effectiveness of NKO on the clinical management of Hyperlipidemia." In the study, 120 participants, including both men and women, took either 1.0 or 1.5 grams of krill oil per day (based on their BMI [body mass index]) or 3.0 grams per day of fish oil. Study participants took a 36-question standardized survey at the end of 30 days, 90 days, and 180 days. This survey measured the patients physical function, fatigue, pain, social function, emotional role, mental capacity, general health and physical appearance. The survey, in use since 1998 and published in over 4,000 different studies, was designed to provide statistically valid results.

I just read a review by David Williams, MD, which revealed that more than 90% of the entire US population is choline deficient.

The symptoms of choline deficiency reflect half the body of studies demonstrating the benefits of krill oil. As we know, krill oil delivers omega-3 PUFAs in a natural phospholipid (choline) bound molecule. 58 different choline molecules have been identified in Biom3ga™ Krill Oil.

The best food sources of choline include egg yolks, animal liver, brain and organ meats, fish eggs, sardines, scallops and shrimp (krill is a tiny shrimp-like crustacean). Based on this list, it is no wonder that the U.S. population is deficient. Dr. Williams reports that the minimum daily intake has been set at 550 mg/day for men and 425 mg/day for women. Each Biom3ga™ krill oil softgel contains 200 mg choline.

How the body uses choline:

Cardiovascular health - The body produces betaine from choline. Betaine helps reduce homocysteine, an independent risk factor for CVD. Extra homocysteine is converted to cysteine, which is converted to glutathione. Glutathione is the most valuable cellular antioxidant, and a primary compound the liver uses for detoxification.

Prevent fat from accumulating in the liver - Studies have demonstrated that humans eating low-choline diets develop fatty liver and liver damage. Effects of a choline-deficient diet range anywhere from fatty liver to cancer.

Support cell membrane integrity - Along with phosphatidylcholine, choline is used to make sphingomeyelin, another phospholipid. Both are structural components of all human cell membranes.

Support healthy nerve transmission - Choline is a precursor to acetylcholine, one of the primary neurotransmitters. Acetylcholine is directly involved in muscle control, the conduction of pain, the process of memory and learning, and REM sleep cycles. Choline micronutrient deficiency in infants can cause permanent brain changes in regions of the brain responsible for learning and memory.

One interpretation of the high antioxidant value of Krill Oil comes from Woman's World magazine: "Krill is a unique oil that is rich in Omega-3 fatty acid, which repairs aging cells so well, studies show it's up to 300 times more rejuvenating than vitamins A and E!"

This claim was derived from the ORAC (Oxygen Radical Absorbance Capacity) studies, which measure the antioxidant power of various nutrients. The ORAC Value chart below shows that Krill Oil has a value which is 300 times as high as either vitamin A or vitamin E, and 47 times higher than fish oil.

Omega-3 Fatty Acids - A recent review on the safety of omega-3 fatty acids by the US Food and Drug Administration concluded that a daily intake of EPA and DHA of up to 3 g is “generally recognized as safe”2. Dosages as high as 3 g to 8 g of omega 3 fatty acids per day (from 10 g to 27 g fish oil) show virtually no significant adverse effects3. The most common side effects observed with fish oil capsule consumption are complaints of a fishy taste and belching of fish flavors. At relatively higher doses, as with any oil, gastrointestinal complaints including loose stools have been reported.

Although there has never been a reported case of clinical bleeding attributed to fish oil consumption even during surgery, obvious consideration should be given to patients with bleeding disorders and patients taking blood thinners or anticoagulants 4,5,6.

Krill Oil - Long-term Krill Oil safety has been evaluated with a 6-month animal study using mice.7 Six months in mice lifespan is equivalent to 27 human years. The mice were fed krill oil amounting to 16.6% of their daily diet. Human equivalent dosage corresponds to 23.1 grams of krill oil (for a 70kg or 154 pound person) or 7 – 11 times the recommended dose. No adverse effects were reported. No pathological findings upon examination of brain, lungs, heart, stomach, pancreas, liver, kidneys, uterus / prostate, intestine, or skin.

The results of the present toxicity assessment confirm that Krill Oil can be considered as safe for human consumption even at 2 to 3 times the highest recommended dose.

Note: People with a known allergy to fish or seafood were not tested in this study. The precaution remains that in the case of fish or seafood allergies, professional allergy testing is advised prior to consumption of Krill Oil.

How Krill Oil is Produced

Krill are small shrimp or prawn-like crustaceans, habitants of oceans off the West coast of Vancouver Island, Russia, Ukraine and Japan. Approximate area of distribution at the Circumpolar in Antarctic waters is 35 million square kilometers. Approximately 90 species have been recognized, most of which range in length from 8 to 70 mm (mean length 16 mm.). Considering a population size of 500 million tons, Krill are the largest Zooplankton group in the world oceans after Copepods. Major predators are Baleen whales (blue, fin, mink), crabeater seals, fur seals, Adelie and macaroni penguins, petrels, fulmars and shearwaters, squid and fish. In Japan humans consume them as an ethnic delicacy. Euphasia Pacifica, commonly known as Krill, make up the order of Euphausiacea, subclass of Malacostraca, class of Crustacea and phylum of Anthropoda

Our supplier's commitment to sustainability runs deep. From its constant communication with the Commission for the Conservation of Antarctic Marine Living Resources (CCAMLR) to its certification program with the Marine Stewardship Council (MSC), Aker BioMarine has made significant investments in people, research and technology to ensure the future of the krill fishery.

The current annual sustainable harvesting quota is 9% of the total estimated biomass (60 million metric tons) in Area 48 where Aker BioMarine and others are licensed to harvest. However, out of abundant caution CCAMLR has set an even lower precautionary quota on the annual krill harvest of only 620,000 tons, or 1% of the total estimated biomass in the designated catch area. Krill is one of the largest underexploited stocks in the oceans; the actual current catch in the Southern Ocean is less than 250,000 tons per year—or 0.35% of the biomass. These catch limits are under CCAMLR’s constant supervision and are regularly reassessed and updated if necessary. In actuality, this is one of the most sustainablymanaged fisheries in the world.

The omega-3 fatty acids in Rejuvenation Science Biom3ga™ Krill Oil, which are almost exclusively EPA and DHA, come in the form of PHOSPHOLIPIDS contrary to all other marine oils where the fatty acids are in a triglyceride form. Biom3ga™ has a particular molecular structure with EPA and DHA occupying the two fatty acid chains of the phospholipids. This makes the omega-3 in the Biom3ga™ Krill Oil significantly more bioavailable than fish oils because it allows the direct entrance of EPA and DHA into the cells.

The astaxanthin and the flavonoid in krill oil esterify with a double bond with the EPA and the DHA respectively. This esterification allows the direct metabolism of the antioxidants making them more bioavailable than other antioxidants on the market.

Because of the abundance of phospholipids in krill oil, it passes through the stomach and is digested in the small intestine. This explains the fact that even at 12 times the DRI (daily recommended intake) there has been no reported incident of regurgitation. This eliminates the most frequent side effect of fish oils which is the fishy aftertaste and frequent reflux.

All of the above make Biomega™ Krill Oil the ultimate Omega-3 marine product, offering remarkable safety, stability, effectiveness, bioavailability, scientific validation and all at a competitive price.

This is the classic test for measuring oxidation in fresh oils. A peroxide value over 5 is an indicator that the product has a high rancidity potential and could fail on the shelf.

Evaluation of the effects of Neptune Krill Oil on the Clinical Course of Hyperlipidemia. JSS medical research inc. June 7, 2003 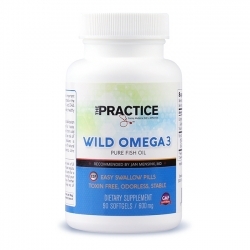