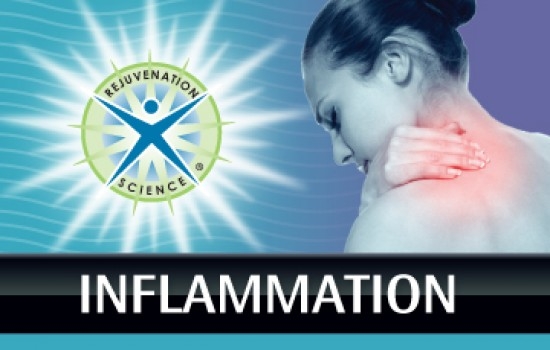 Chronic systemic inflammation is an underlying cause of many seemingly unrelated, age-related diseases. As humans grow older, systemic inflammation can inflict devastating degenerative effects throughout the body.1,2 This fact is often overlooked by the medical establishment, yet persuasive scientific evidence exists that correcting a chronic inflammatory disorder will enable many of the infirmities of aging to be prevented or reversed.

Pharmaceutical companies have recently begun marketing their drugs for alternative uses, such as reduction of inflammation. Studies indicate that statin drugs such as pravastatin (Lipitor®) (40mg/d) or atorvastatin (Pravachol®) (80mg/d) reduce c-reactive protein an average of 21% over a period of 1½ years.5

Non-drug therapies to reduce systemic inflammation as measured by c-reactive protein include:

Omega-3 and omega-6 fats are the raw materials from which eicosanoids, hormone-like substances with multiple effects on body systems, are made. One of the most important duties of eicosanoids is to regulate inflammation, and their manufacture depends upon the supply of fats in the diet. When the optimal (2:1) balance of omega-6 to omega-3 is consumed,12 inflammation is kept in check, occurring when necessary to heal the body but rarely getting out of hand. With a diet high in omega-6 vegetable fats and low in omega-3 fats, eicosanoid production shifts accordingly. The end result is greater inflammation.

Inflammation Implicated in Many Diseases

A chronic inflammatory state, as evidenced by elevated C-reactive protein, results in significant damage to the arterial system.

A series of landmark studies by Paul Ridker, M.D. and colleagues indicates that 25 to 35 million Americans have total cholesterol within normal range but above-average levels of inflammation within their cardiovascular systems. This inflammation has significant impact on heart disease risk.13-15 The Women’s Health Study, which involved 39,876 healthy postmenopausal women, supports the C-reactive protein link to cardiovascular disease.16 Those with the highest levels of C-reactive protein had five times the risk of developing cardiovascular disease and seven times the risk of having a heart attack or stroke compared to subjects with the lowest levels. C-reactive protein levels predicted risk of these events even in women who appeared to have no other pertinent risk factors.

Research on C-reactive protein indicates that cholesterol-filled plaques in blood vessels may not pose any real danger unless they are affected by inflammation. Inflammation weakens plaques, making them more vulnerable to bursting or pinching off a clot that can then block coronary vessels.20-22

What is the source of this inflammation? Researchers have a few different theories. Some suggest that plaques are actually an attempt on the part of the immune system to repair some sort of damage to vessel walls. According to this theory, the inflammation arises as the body sends immune factors to the damaged area. Other theories implicate pathogens, including Chlamydia pneumoniae and the ulcer-causing Helicobacter pylori. Some research has indicated that people who are seropositive for these pathogens are at significantly elevated risk of a cardiac event,36-37 and that this may be due to a state of chronic, low-level inflammation spurred by the continued presence of the bacteria.

Well-established cardiac risk factors such as obesity, smoking, hypertension and chronic periodontal disease all increase inflammation and C-reactive protein levels in the body. Fat cells literally pump out C-reactive protein, which could explain why being overweight is so bad for the heart.23

Mayo Clinic epidemiologists published in Arthritis & Rheumatism March 2005 that systemic inflammation associated with rheumatoid arthritis may be the cause of increased risk of cardiovascular death among patients with CVD. In a 40-year study, following 603 patients from 1955 to 1995, 354 patients died and 176 of those died from cardiovascular disease (CVD). The risk of dying from CVD was significantly higher among subjects who experienced elevations of ESR values, inflammation of the blood vessels and rheumatoid lung disease, with the presence of any of these factors more than doubling CVD mortality risk.24

Senior author Sherine Gabriel MD commented, “Our previous research showed that rheumatoid arthritis patients have a higher risk of early death than others and these deaths are mostly due to cardiovascular disease. We suspect that systemic inflammation promotes this risk. Our findings support this hypothesis.”24

Diabetics, as well as Alzheimer’s patients have elevated markers of deep inflammation. Research led by Dr. Ridker at Brigham & Women’s Hospital in Boston has shown a common inflammatory basis of these two diseases — illnesses that often strike in the same individuals.26

The February 2004 Journal of the American Medical Association published a report that establishes a link between elevated levels of the inflammatory marker C-reactive protein and age-related macular degeneration (AMD). AMD is a disease of the eye which affects older individuals and is the leading cause of vision loss in seniors.28

Researchers evaluated results from 930 participants from two AREDS study sites. They found that those whose CRP levels were in the highest one-fourth had a 65 percent increased risk of macular degeneration compared to those in the lowest quartile. Researchers concluded that their study was the first to establish a link between C-reactive protein levels and AMD in a large population. “Anti-inflammatory agents might have a role in preventing AMD, and inflammatory biomarkers such as CRP may provide a method of identifying individuals for whom these agents and other therapies would be more effective.”28

Multiple studies published in JAMA, from researchers at Harvard Medical School, have shown that those with the highest intake of anti-inflammatory substances – fish oil containing omega-3 fatty acids DHA and EPA and lutein – lower inflammation, which is associated with AMD.28

Research conducted at the Methodist DeBakey Heart Center in Houston identified a molecular link between obesity and inflammation. This research shows that a high fat diet draws inflammatory cells into fat tissue, which prevents the tissue from storing the fats we eat. When the tissue can not store these fats, they end up in the liver and muscle, which in turn causes weight-gain and diabetes.39

JAMA, Feb 2004, reports that in a 10-year study of 22,887 people living in Maryland, those with the highest levels of C-reactive protein are three times as likely to contract colon cancer as those in the lowest ranges.29

Researchers writing in the Jan 2006 Archives of Internal Medicine evaluated data from 3,189 participants in the 9-year Blue Mountain Eye Study in Australia. They found that subjects whose white blood count (WBC) was in the top 25 percent of the study population (with >7,400 cells/ml) had a 73 percent higher risk of dying of cancer than those whose WBC were in the lowest 25 percent (<5,300 cells/ml). Analyzing independently for lung cancer, having a WBC in the top fourth tripled the risk of dying from the disease compared to those in the bottom quartile. Their conclusion, “Local inflammatory processes that have long been known to be associated with tumor progression may be reflected in the systemic inflammatory marker of higher WBC count.”30

Non-drug therapies to reduce systemic inflammation as measured by c-reactive protein include the following foods and supplements.

Researchers examined data from the Health, Aging and Body Composition Study which provided information on body mass index, exercise and activity levels, medication and nutritional supplement intake for 2,964 men and women. Taking a multivitamin supplement was associated with CRP levels similar to those who exercised 180 minutes/week or more and did not take supplements. The use of multivitamin supplements, beta carotene, vitamins C and E was associated with lower levels of CRP and interleukin-6 regardless of exercise level.32

Vitamin E’s ability to protect against heart disease has also been attributed to its blood-thinning effects, but recent research has shown that it lowers C-reactive protein levels considerably.6,7,8,33,34

In a baboon study published in the Oct 2005 American Journal of Clinical Nutrition, 21 subjects’ CRP were evaluated at baseline, then given vitamin E in doses of 250, 500, or 1000 IU/kg diet. CRP was reduced 52% on average. Co-supplementation with Coenzyme Q10 further reduced CRP to about 30 percent of baseline, a 70% total reduction.6

One of the best ways to control inflammation is to take omega-3 rich fish oil supplements daily. Fish oil supplements contain both DHA (docosahexaenoic acid) and EPA (eicosapentaenoic acid). A recent study found that three grams of fish oil a day was heart-protective.35 Cod liver oil does not fall in this category.

C-reactive protein (CRP) levels were 29% lower among those in the highest quintile of total omega-3 fatty acid intake, compared with the lowest quintile in a cross-sectional study of 727 women aged 43–69 years from the Nurses’ Health Study I cohort.10

The results of a recent study show with a high level of certainty that Krill Oil, at a daily dose of 300 mg, may significantly inhibit inflammation by reducing C-reactive protein (CRP).11

After taking Krill Oil 300 mg/day for a period of 7, 14, and 30 days, CRP was reduced 19.3%, 29.7% and 30.9%. In this placebo-controlled study, 90 patients with cardiovascular disease, rheumatoid arthritis or osteoarthritis and with increased levels of C-reactive protein >1.0 mg/dl were evaluated. The Western Ontario and McMaster (WOMAC) University Osteoarthritis index was administered to validate the results.11

20. Jialal I, Devaraj S. Inflammation and atherosclerosis: the value of the high-sensitivity C-reactive protein assay as a risk marker. Am J Clin Pathol 2001 Dec;116 Suppl:S108-15.