Coenzyme Q10 is a crucial component in the cellular energy production cycle. CoQ10 is naturally produced in all cells of the human body, and has been studied extensively for more than 40 years. CoQ10 plays a crucial role in the production of cellular ATP (adenosine triphosphate), which provides energy to all cell functions.

All tissues in humans possess Coenzyme Q10, but there are great differences in concentration. The heart muscle has the highest concentration, followed by the liver, kidney, spleen and pancreas. CoQ10 is found in concentrated quantities inside the cell's organelles, especially within the Golgi bodies and mitochondria.

Within the mitochondria, CoQ10 is utilized in the metabolism of fats and carbohydrates. More than 90% of the energy from our cells is produced from the aerobic respiration that takes place in the mitochondria. CoQ10 facilitates electron transfer within this inner membrane for the production of ATP (adenosine triphosphate), the usable unit of energy.

Coenzyme Q10 is also naturally present in the cell membranes. Another function of CoQ10 is to make sure the cells' plasma membranes remain flexible. The fluidity of the membranes is crucial to proper physical performance since membrane fluidity affects membrane receptors, carriers and enzymes.

When it comes to achieving optimal results from Coenzyme Q10 (CoQ10), how much you absorb is of critical importance. Recently published studies conclusively show that higher CoQ10 blood levels provide far greater benefits.

Researchers were surprised when they found that this new form of CoQ10 was 40% more effective than conventional CoQ10 in slowing aging markers in middle-aged mice.

It's impressive enough to review the statistics on this new form of CoQ10, such as a study on aged rats that documents the 2.5 times greater anti-fatigue effects compared to conventional CoQ10 supplements.1 What has researchers astounded, however, is seeing the actual video footage of the mice themselves in response to this superior form of CoQ10.

The video shows that the aging group of mice receiving no supplementation is essentially immobile and unresponsive, exhibiting lesions in and around the eye with spinal and limb deformities and a patchy, discolored coat. Many of these pathological events that are seen in the mice not supplemented with CoQ10 are classic signs of degenerative aging suffered by humans. Aging mice supplemented with Ubiquinol, on the other hand, are alert, responsive and energetic with no physical lesions or deformities, and a glossy coat resembling that of a young, healthy mouse.2

Why Ubiquinol Works So Much Better

Coenzyme Q10 exists in both ubiquinol and ubiquinone forms, but they have very different roles to play in the body. For the first time, a stabilized ubiquinol form of CoQ10 is available in capsule form. When compared to conventional (ubiquinone) CoQ10 supplements, the benefits of ubiquinol are enormously superior.

For example, a recent peer-reviewed study measured the absorption in humans 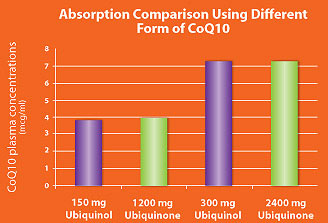 What may also make this novel form of CoQ10 so much more effective than CoQ10 supplements on the market today is its ability to remain biologically active in the body much longer. In a study on aged rats, blood concentrations of this new ubiquinol CoQ10 was 3.75-fold greater after eight hours compared to the same amount of conventional coenzyme Q10.2

The superior absorption and ability to remain bioavailable over a greater sustained time period may account for the unprecedented anti-senescent effects observed with new ubiquinol compared to ubiquinone.

In what may be the most profound anti-senescent discovery ever made about a dietary supplement, scientists have demonstrated that this novel form of coenzyme Q10 is vastly superior to the CoQ10 supplements that millions of Americans use today.

Since this novel CoQ10 absorbs so much better, and remains in the bloodstream so much longer than conventional supplements, fewer milligrams are needed to provide greater effects.

Compared to expensive commercial supplements, taking just three 50 mg ubiquinol capsules a day provides the human body with the equivalent of over 1000 mg of enhanced-absorption conventional coenzyme Q10. For most healthy people, one capsule of the new ubiquinol CoQ10 will provide significantly higher blood levels than the CoQ10 they are presently taking.

Coenzyme Q10 is a crucial component in the cellular energy production cycle. CoQ10 is naturally produced in all cells of the human body, and has been studied extensively for more than 40 years. CoQ10 plays a crucial role in the production of cellular ATP (adenosine triphosphate), which provides energy to all cell functions.

Adapted with permission from Life Extension.

The National Center for Complementary and Alternative Medicine (NCCAM) at the National Institutes of Health (NIH) facilitates research and evaluation of complementary and alternative practices, and provides information about a variety of approaches to health professionals and the public. The following statement on CoQ10 side effects is provided by NCCAM from their PDQ:

No serious side effects have been reported from the use of coenzyme Q10. Some patients using coenzyme Q10 (100 mg or higher/day taken at night) have experienced mild insomnia (inability to sleep), elevated levels of liver enzymes (in patients taking doses of 300 mg/day for extended periods of time, but no liver toxicity has been reported), rashes, nausea, and upper abdominal pain. Other reported side effects have included dizziness, visual sensitivity to light, irritability, headache, heartburn, and fatigue.

Patients should talk with their health care provider about possible interactions between coenzyme Q10 and prescription drugs they may be taking. Certain drugs, such as those that are used to lower cholesterol or blood sugar levels, may reduce the effects of coenzyme Q10. [In these cases, more CoQ10 may be needed for a beneficial effect.] Coenzyme Q10 may also alter the body’s response to warfarin (a drug that prevents the blood from clotting) and insulin.