Objective. Recent published reports offer anecdotal evidence that cis-9­cetyl myristoleate may provide significant amelioration of various arthritic conditions. We set out to perform controlled studies to determine if this material was efficacious, either in the short term, or in some measurable manner, over a much longer period.

Results. At the start of this study, the duration, severity, and pattern of arthritic episodes were found to be similar in the 3 treatment groups. At the end of the study it was found that the number of arthritic episodes was significantly reduced, and the duration of episode-free time was significantly prolonged, in the two cis-9-cetyl myristoleate groups compared with the placebo group.

The terms arthritis and psoriasis have come to describe a series of conditions reflecting a wide range of symptoms, some permanent and some transient. Each condition, however, is typified by certain common elements such as some sort of inflammatory response with resulting pain, various forms of cellular degeneration and frequently, permanent loss of mobility and quality of life.

With the exception of osteoarthritis, most researchers are beginning to believe all arthritic conditions may have a common, albeit many-faceted, etiology - autoimmune dysfunction. Unfortunately the great number and complexity of immune system components and their diverse interplay has made this theory difficult to prove.

Study design. The study was a 32 week (8 week cycle, 4 in-hospital & 4 in follow-up), multicentric, double-blind, randomized, placebo-controlled parallel trial that compared the efficacy of cis-9-­cetyl myristoleate alone, and cis-9-cetyl myristoleate plus glucosamine hydrochloride (GH), sea cucumber (SC) and hydrolyzed cartilage (HC), administered over a period of 30 days, with placebo, for the treatment of various forms of autoimmune diseases commonly characterized as arthritis and psoriasis. Out of a dose of 90 grams of total fatty acid esters, 18 grams constituted cis-9-cetyl myristoleate. Those study patients who received the support nutrients GS, SC, & HC were given a total dosage of 18 grams each of these nutrients.

The study, was conducted under the auspices of the Joint European Hospital Studies Program. This study was designed by a committee, which consisted of rheumatologists and biostatisticians experienced in the development and execution of clinical trials. Oversight of the study was accomplished by an executive committee, composed of the primary researcher and primary statistician, selected participating investigators, consultants; and an independent oversight committee consisting of two experienced federally controlled, state health department rheumatologists and one state health department biostatistician.

Eligibility criteria. Patients were required to have inflammatory arthritis of at least one year duration in at least one peripheral joint, excluding the shoulders and hips. Included in this parameter, affected joints must have had joint tenderness and joint swelling of >2 on a four point scale and joint patient-physician overall assessment of involvement ranging from; none - mild - moderate - severe - very severe. The patients inducted into this trial for the purposes of psoriatic testing were chosen on generally the same criteria - involvement of epidermal involvement from: none - mild - moderate - severe - very severe.

Criteria for exclusion included unwillingness to stop the use of tobacco and caffeinated beverages, at least for the duration of the trial. Tobacco and caffeine use have been reported to greatly hamper the positive (if anecdotal) result of the use of cis-9-cetyl myristoleate. It also should be noted here that the use of any other medication in all forms of arthritis as well as psoriasis were not excluded as it was determined this would limit participation. It was also deemed advisable to approximate as much as possible, conditions that would be found in the average arthritic. One exception to this condition was the exclusion of patients showing sensitivity to salicylates or ibuprofen which were used as excipients in the placebo. Potential participants with other severe chronic conditions were excluded, as it was the opinion of the primary investigator that this type of participant would limit the potential successful completion of the study period.

All patients had failed to respond to therapy with therapeutic doses of one of the NSAIDs. All patients who took NSAIDs during the trial were required to be on stable dosages for one month prior to entry and throughout the trial. No systemic or intrarticular steroids were allowed.

Informed consent. The study protocol was reviewed and approved by the federally controlled state oversight committee. Prior to entry into this trial, each potential study participant was informed of the nature, duration, and purpose of the study to be administered, and all the potential benefits, inconveniences, and hazards that could reasonably be expected.

Clinical assessment. Outcome measures of disease activity and therapeutic efficacy were obtained at the time of screening (not more than four weeks before study entry), randomization at week zero, and thereafter at weeks; 1, 2, 3, and 4. Outcome measures included a variety of patient-reported, clinical, laboratory and radiographic assessments.

Clinician assessment measures included joint counts, dactylitis, Enthesopathy Index, Spondylitis Aritcular Index, chest expansion, modified Schober's test, finger-to-floor test and physician overall assessment as detailed elsewhere in this paper. Additionally, the presence of symptomatic keratoderma, phalangeal and digital deformation as measured from a normal range of vertical protrusion at rest were measured. These tests, singularly and collectively were then compiled into a patient-by-patient qualitative scale as; none = 0, mild = 1, moderate = 2, severe = 3 and very severe = 4.

Laboratory assessment. Laboratory evaluation included a urinalysis and complete blood cell count, with leukocyte differential and reticulocyte count. Chemical surveys and a Westergren erythrocyte sedimentation rate (ESR) determination were done at every visit by secondary researchers daily in the two hospital settings. The C-reactive protein (CRP) level was evaluated at the first and last day of the hospital stay. At the screening times, blood was drawn for HLA-B27 typing and RF and ANA determinations.

Radiology assessment. At the screening visit, all patients had the following radiographs performed: anteroposterior views of the pelvis and oblique views of the sacroiliac joints.

Adverse drug reactions (ADR's). Patients were screened for ADR's at every secondary researcher's visit. Patients were withdrawn from the study medication if any of the following were found; WBC less than 3000/mm3, absolute polymorphonuclear count leas than 100000/mm3, acute or progressive decrease in hemoglobin or hematocrit, proteinuria less than 500 mg. for 24 hours, drug fever or significant rash.

Compliance. The patients were queried at each secondary researcher's visit regarding the dietary supplement or topical lotion they had used. A capsule count for the trial medication was done at each consultation to monitor compliance.

Biostatistical considerations. Each patient was classified as a treatment responder or non-responder based on the following definition. Assessment measures were selected a priori, and criteria for clinical improvement and worsening were defined for each patient self-assessment and physician assessment (improvement = decrease by 1 category: worsening = increase by 1 category); joint pain/tenderness score and joint swelling score (improvement = decrease by 30%; worsening = increase by 30%). Treatment response was then defined as improvement in at least 2 of these 4 measures, one of which must be joint pain/tenderness or swelling, and ITO worsening in any of the 4 measures. The study was designated with a 90% power for detecting a placebo response rate of 3096 compared with a cis-9-cetyl myristoleate and cis-9-cetyl myristoleate plus GS, SC & HC response rate of 50%, assuming a 10% withdrawal rate. This resulted in a target sample size of 431 patients with an actual sample size of 382.

In short, the analytical method was the change in primary and secondary outcome measures from baselines to the last available follow-ups analyzed using t-tests for continuous data and chi­-square tests for ordinal and categorical data. Mixed-model analyses were done to characterize the response patterns over time using SAS PROC MIXED for continuous data and a program named MIXOR for categorical and ordinal data. All other analyses were conducted using SAS version 6.08. All statistical tests were two-sided and P < 0.05 was the criterion for statistical significance.

Statistical Chart 1 outlines the baseline demographic, clinical, and laboratory variables. The duration of disease was 12 years. The Westergren ESR and CRP levels were mildly elevated. There were no statistically significant differences in any of these baseline parameters between the patients taking cis-9-cetyl myristoleate and cis-9-cetyl myristoleate plus GS, SC & HC and those taking placebo.

Withdrawals and adverse drug reactions. Statistical Chart 3 summarizes the data of patient exits from the study. Forty-nine patients withdrew from the study before completing the study, 16 from the cis-9-­cetyl myristoleate and 10 from cis-9­-cetyl myristoleate plus GS, SC & HC groups, 2 from the psoriatic group, and 21 from the placebo group. Follow-ups in all groups averaged approximately the same and these measurements were combined, combined average - (mean +/- SD 6.97 +/- .2.64 months) (P=.06). Withdrawal of consent was the most common reason for discontinuing the study. Seven patients withdrew because of no improvement or worsening disease. Two patients had to be withdrawn from the study because of concurrent illnesses requiring conflicting medication. The majority of withdrawals, however, were the result of patient addictions to nicotine, caffeine and alcohol and the patient inability to cease these activities during the study period.

Statistical chart 2 displays the percentages of study patients showing improvement in the primary outcome variables (columns 1-3). The numbers to the right display the significance levels for the differences between treatment groups (columns 4-6). All of the significant levels are much less than 0.05, which means the differences between groups are considered statistically valid. For all four primary outcome variables (treatment response, physician assessment, patient assessment and joint swelling score), cis-9-cetyl myristoleate & GS, SC, and HC did significantly better than the cis-9­-cetyl myristoleate group, and the cis-9-­cetyl myristoleate group did significantly better than placebo.

The chart also displays the results for the secondary outcome variables. The averages (mean average as opposed to median or mode) are presented in columns 1-3 along with their standard deviations (statistical measurement of data variations). Again, the numbers to the right display the significance levels for the differences between treatment groups (columns 4-6). "NS," means that there was no significant difference between any measured groups labeled as such. When the groups are significantly different from each other, the significance is displayed. None of the secondary outcome variables were significantly different between the cis-­9-cetyl myristoleate group and placebo. The cis-9-cetyl myristoleate & GS, SC, HC, group did significantly better than placebo for duration of starting involvement, joint pain/tenderness score, joint swelling score, Enthesopathy index, spondylitis articular index and the modified Schober's test. The cis-9­-cetyl myristoleate & GS, SC, HC, group did better than cis-9-cetyl myristoleate alone for the joint pain/tenderness score and the modified Schober's test.

Reprinted with exclusive permission of The Townsend Letter for Doctors and Patients, and Klabin Marketing. 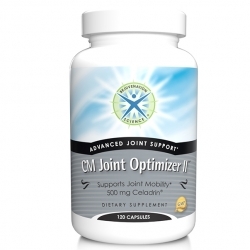